They say customer retention is so critical that growing it by 5% will lead to a 25-95% increase in income. However, before the retention of clients, the acquisition plays a major part in the business operation. Marketing strategies like cold calling, flyers distribution, etc. were shown to be effective, but would require too much time and expense. Some claim that cold calling is already dead. Since consumers are now more empowered, more than 70% of purchasing decisions have already been made prior to receiving an unsolicited call from a salesperson. On the other hand, flyers distribution is still used; statistics show that 57% of people who received an addressed mail opened it the day it arrived while 5% of people read or at least glanced at the door dropped flyers. If not done properly, too many leaflets will end up in the bin with you wasting money.

In this day and age, marketing your business digitally is the best way to reach potential customers. According to 2020 statistics, over 4.5 billion of human population on the planet were active internet users. More than 5 billion people owns mobile phones, which accounts for 91% of the total number of active internet users. These figures are indicators of boundless online marketing potential.

Tradesmen, like electricians, are generally seen in action tending to the needs of their clients. Some may even be working from midnight to the dawn of weekends and holidays for emergency services. No matter how busy electricians could be, marketing of their business should never be set aside. All thanks to the brilliant mind of Tim Berners-Lee and his team, who launched the World Wide Web project in 1991, which was the beginning of all things digital.

Now, electricians can promote their services such as security camera installation online that could reach their target market in no time. People use their mobile phones in search all the products and services they need, especially in the event of emergency, which is why the online presence of electricians is so important.

Two effective ways electricians could market their business are through SEO and Social Media.

SEO or Search Engine Optimisation is one of the most effective forms of marketing available today with over trillions of searches being conducted every year. SEO seeks to optimise a website by improving both on-page and off-site SEO elements in an effort to increase positioning in the major search engines for particular keywords or phrases. By focusing on valuable keywords, electricians will be able to selectively target highly qualified leads and showcase their products and services for a fraction of the cost of traditional advertising.

Social Media is the voice, ears and opinion generator of the global community in which electricians’ products and services are consumed. What sets social media management apart from other forms of marketing communication is the speed and ease with which information flows via online social media. There are over 4 billion active social media users each year, and through social media channels, electricians can make their business more visible to their target market.

There are far more ways that electricians can market their business online that have proven to be successful. It is recommended that digital marketing agencies for electricians and tradies be consulted in order to know which platform/s will be most effective for the business.

All You Need To Know About Smart Ceiling Fans

With the invention of smart light bulbs and thermostats, many people anticipated the production of smart ceiling fans. A few years later, they have become so popular that they are being sold all over Australian markets. As a matter of fact, there are higher search volumes for ceiling fans compared to air conditioners and with good reason. Compared to regular air conditioning systems, smart ceiling fans are way more energy-efficient. While a regular HVAC system sets you back 51 cents per hour, a ceiling fan only costs 1 cent per hour.

Not that you have to choose between the two. Using both at the same time is actually recommended. Smart ceiling fans additionally contribute to overall indoor air quality. This is because they deliver powerful wind movement and circulate cool air faster. With all this in mind, you might be wondering what additional features does a smart ceiling fan have, how does it work, and how much does it cost?  Read on to find out.

How Do Smart Ceiling Fans Work

The only variation smart ceiling fans have over regular ones is that they know when to keep the air still and when to spin. They can sense temperature change and automatically turn on or off. Alternatively, they can be programmed to start running or switch off when a preset set of temperatures is reached or depending on a set schedule. Advanced smart ceiling fans feature motion detectors as well as geolocation settings. They are operated using Bluetooth or Wi-Fi. Remote control can be achieved using integrated voice technologies such as Bixby, Google Assistant, and Alexa.

Purchasing readily equipped smart ceiling fans from reputable companies such as Carro, Hunter Pacific, and Three Sixty costs anywhere between A$ 429- A$ 1000. You don’t have to necessarily buy one of these, though, as you can repurpose your ordinary ceiling fan to make it smart. Upgrading an old ceiling fan to become smart can be done in 3 ways. One, you can use an existing motorized IR blind remote and a hub. Two, you can replace its switch with a Zigbee version or a Z – Wave. You can also hardwire a piece of small equipment inside your ceiling fan. Upgrading an old ceiling fan to become smart takes longer than installing a new one. It also requires one to have knowledge of the property’s wiring. Enlisting the help of a tech-savvy ceiling fan installation electrician is recommended.

Some people may deem smart ceiling fans as a splurge. This is, however, not true. Quite on the contrary, while the initial cost of buying a smart ceiling fan may be expensive, it reduces overall energy consumption, especially if it is run on cue with a smart HVAC system. This is because cooler air from the air conditioning system is circulated faster. Furthermore, you can run your air conditioning at several degrees higher than usual without becoming uncomfortable. This increase consequently saves your HVAC’s compressor on cycles by 10%,  leading to reduced energy consumption. This while you get to enjoy quality air in your home. 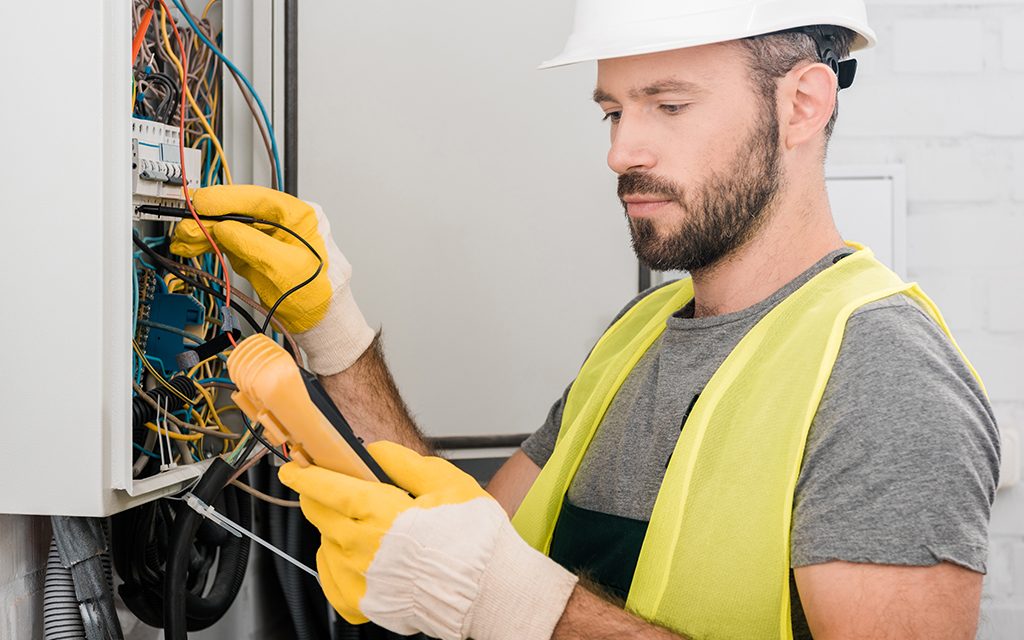 Rowan Atkinson Started Out as an Electrician: Who Else Did?

A few celebrities are either born into stardom or become famous at really young ages. However, the vast majority of the biggest celebrities have less glamorous pasts. Before becoming stars receiving accolades for their work, most actors, musicians, scientists, and artists were working regular 9-5 jobs before their careers. While working at cafes and fast food joints before blowing into a star is a cliche romanticized idea in movies, most people in these industries opted for traditional jobs before discovering their talents and abilities.

When interviewed, you will hear these celebrities saying that they were cleaners, accountants, teachers, and even truckers before becoming famous. However, one exciting career choice that a number of celebrities had before they became famous is working as electricians. Elvis Presley was an electrician, and his experience in the electrical field proved useful in his successful musical career. For instance, some say that electrical emergencies teach you how to handle live performance adrenalin. Here are other famous people that worked as electricians in their early lives.

If you don’t know who Rowan Atkinson, then you most probably know Mr. Bean. Most famous for his iconic role as the comic Mr. Bean, Rowan Atkinson is an award-winning actor and comedian. If you follow celebrity lifestyle insights, you will have known that the celebrated actor pursued a degree in a different career than acting, at Newcastle University. Atkinson studied electrical engineering there and proceeded to pursue a master’s degree on the same, at The Queens College. However, Rowan Atkinson involved himself with writing as well as performing sketches even in those early days. Even after studying electrical engineering at the master’s level, Atkinson opted to pursue a television and radio career.

It will probably come as a surprise to you that before Albert Einstein became the iconic scientist that everyone knows him as today, he worked as an electrician in his dad’s company. Einstein’s father and uncle had founded this electrical engineering company while he was still young. This company was the first to bring electricity to Munich, Germany. Einstein was an electrician assistant. However, Albert Einstein gave more importance to his scholarly endeavors than his electrical career. The Einstein brothers eventually lost their bid to light all of Munich because their equipment was not sophisticated enough to convert direct current into alternating current.

Before he ever became the guitar for the world’s most iconic boy band, The Beatles, George Harrison worked at Blackler’s store as an apprentice electrician. However, Harrison was not really good at it, as he once mentioned to reporters. In his own words, he “kept blowing things up, so I got dumped.” While still working as an apprentice electrician, George Harrison played with The Quarrymen, who later changed their name to The Beatles. Although his career path as an electrician did not work out for him, he did benefit from this apprenticeship. He was good at setting up sound equipment for the band, which was beneficial.

Other celebrities that worked in the electric field before they become famous include John Deacon and Alfred Hitchcock.

Security Cameras Use the Best of WebCam Advancements

Because of the advancements in technology, it is quite easy for anyone with the right skills to get your business address. Some of these people don’t have good intentions and probably use this information to break into your business and steal. Sometimes these thefts are even in collaboration with some employees. They are comfortable doing this when they know that they can come at specific times when no one is around and get away without being seen. That is why it is necessary to look for the best security camera in the market. You should also track down the best security camera installation expert to ensure that the camera is working well and covers all the angles you want thoroughly. As a business, you obviously have specific security needs, different from any other company. For this reason, you need to consider a few things before getting the CCTV cameras that suit your needs.

The areas that you desire to cover with your security cameras will determine the resolution that you require. If you want to cover a wide area of your business premises, you need a high-resolution camera to ascertain the images’ quality even when you zoom in. On the other hand, if your business space is small, you can settle for a low-resolution camera, although you can never go wrong with the high-resolution ones. Assessing the space that you want to monitor will help you to spend your money effectively, as per your needs.

Most security cameras can be used for inside and outside use. However, you need to carefully pick one that suits your specific business environment, primarily because of housing and mounting. If your business is located in an extremely cold environment, going with a CCTV camera with an inbuilt heater and a durable design will be a good move. This will ensure that even in the extremely cold weather, your cameras are still able to start up and work efficiently. If your business deals with transport, for instance, you could go with a video surveillance camera that works efficiently in an environment with high and frequent vibrations.

Other factors, such as the size of the areas you need to be covered, and the quality of audio that you need should be considered. Paying attention to these factors will guarantee that you have the right security cameras for your business.